What is Proximity Sensor & their types 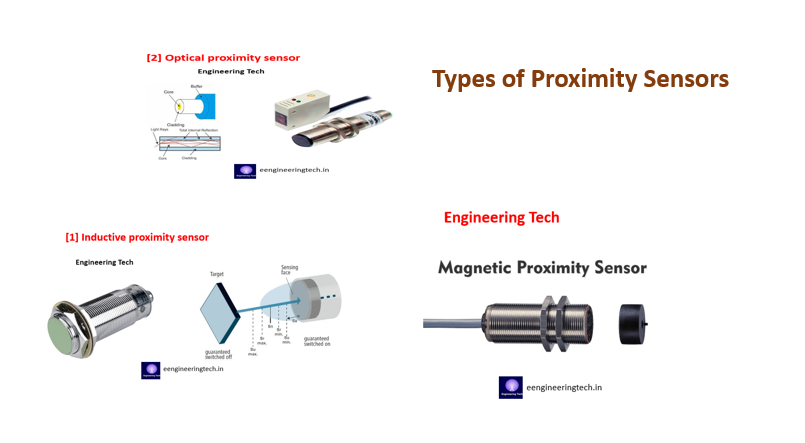 In this site we will learn about the different types of the proximity sensors, their specifications and working.

Now in this blog we are going to learn about the different types of the proximity sensor, their specifications and working.

According with the non contact object detection method, there are five types of proximity sensor. They are,

Let, we will discuss basic working principle of these five sensor.

The Inductive proximity sensor are useful to detect the metallic object which is  present next to their active side. This Inductive Proximity sensor operate under the electrical principal of inductance; where a fluctuating current induces an Electromotive force (EMF) in a target object.

The Optical proximity sensor includes a light source, and a sensor that detects the light. These sensors detect objects directly in front of them by the detecting the sensor’s own transmitted light reflected back from an object’s surface.

A Magnetic proximity sensor Base on the mechanical principle, this sensor only detects the magnetic field [e.g., Permanent magnet].

They sense the presence of a magnetic object, commonly referred to as the target. The target, characterized by its magnetic field, triggers the switching process; when it enters the detection range of the sensor.

Ultrasonic Proximity sensors emit an ultrasonic pulse which is reflected by objects in its path and the reflected wave enters the sonic cone. They employ sound waves to detect objects, so color and transparency do not affect them( though extreme textures might).

7 thoughts on “What is Proximity Sensor & their types”