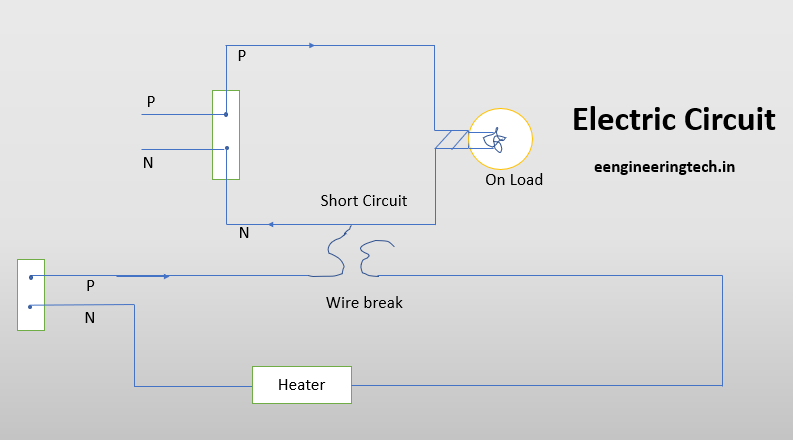 Definition :- A circuit without interruption, providing a continuous path through which a current can flow. Means circuit loop closed condition with any load.

An electric circuit through which current can flow in an uninterrupted path. Compare open circuit.

Definition :- An electrical circuit in which the continuity is broken so that current does not flow. Means circuit loop open condition with any load.

A circuit is made closed if the electricity is flowing from an energy source to the desired endpoint of the electric circuit.

A parallel circuit comprises branches so that the current divides and only part of it flows through any branch.

In parallel circuit Voltage are same but it’s load current flow in path is different.

A series circuit comprises a path along which the whole current flows through each component. In Series Circuit Voltage are different but its Current is same.

A parallel circuit comprises branches so that the current divides and only part of it flows through any branch.

Easy to design and build the circuit.

If a component breaks, the current flow stops.

It acts as a current regulator.

The cost to build a Series Circuit is less compared to Parallel Circuit.

Definition :- A short circuit is an abnormal connection between two nodes of an electric circuit intended to be at different voltages.

Between Two path circuit in which two terminal positive positive ( different voltages flow ) to connect or touch each other so it will be short that called is electric short circuit.

More knowledge of electric circuits so please visit and follow this site..

JUST EASY FOR YOU